It’s not a good feeling when you cannot do too much for your patient as a doctor. That’s how I felt when I walked into the room to see Valerie for the first time.

She was in her 60’s. She was flanked by her two adult granddaughters, who were very close to their grandma. You could tell that at some point in her life when she was younger, she may have been an athletic person, but now she was reduced to skin and bones. She couldn’t walk without assistance, so she was sitting in a wheelchair, which was taking up a lot of room in the relatively small exam room. She had certainly aged a decade more than her real age. This was reflective in the wrinkles on her face. Some wrinkles are age-related, but hers looked like wrinkles of self-abuse. The kind of wrinkles that people develop when they smoke and drink a lot. I’m not sure if there is such a thing, but we all have seen people start looking a certain way if they abuse their bodies. She had a raspy cough, indicating that she had a cigarette right before entering the room and was waiting impatiently for her next one, which she would smoke as soon as we were done with the visit.

I had already read in her chart that she woke up one day, and her eyes looked yellow as if her grandson had colored them with his Crayolas. Before that, she had already lost more than twenty pounds, but she was attributing it to cutting down on energy drinks. She wasn’t in any pain. Yet. Tests had shown that she had developed pancreatic cancer that had spread to her liver and lungs. Her kidneys had also taken a hit, and the nephrologist told her that she was lucky that she did not need dialysis immediately but that she may need it any time. Food tasted like garbage. Breathing was OK, but she felt that she had to catch her breath every few minutes. While her body was wilting away rapidly, her eyes were filled with hope as she was talking to me.

“Typically, we can give chemotherapy which doesn’t cure this kind of cancer but can buy us some time and quality of life. In your case, however, I think chemotherapy will be worse than the cancer because your body is too weak to go through it,” I concluded.

“So what do we do then, doc?” She inquired desperately.

“We will make sure that you are comfortable, and we will focus on your symptoms. It would be best that you transition to hospice level of care,” I responded.

“You mean you want me to go home and die?” she asked.

“In a way, yes. If you were my mother, I would say the same thing.”

The hope in her eyes shuts down as the lights go off in a theatre after the show ends. She did not say anything for a few minutes. Her granddaughters became tearful, and I offered them tissues.

So far, whatever was happening in that room, was quite a routine occurrence for me and scenes like that are, unfortunately, a daily occurrence in a cancer center. But then she said something for which I was not prepared.

“Hey, doc. You remind me of my boyfriend that I had when I used to live in New York City.”

Her eyes went into a reminiscing dreamy state for a moment. She stared in the air and continued, “He was the best man I had ever had. He left me, but I never ever found a man like him.”

I became paralyzed for a moment because I did not know how to respond. I just nodded. “Thank you, I’m flattered.” That was all that came to my mind to say.

“He was from Pakistan and took care of me like a man takes care of his woman.” Now she was looking me in the eye.

“I am also from Pakistan,” I told her.

This was probably her way to change the topic of her grim prognosis and make the moment lighter. She wanted to be brave for her granddaughters and show them that even the news of death couldn’t break her. She shook off the grief, and a cute, mischievous smile spread across her face. She saw me getting slightly uncomfortable in my chair and proceeded with her flirtation.

“He used to make the best lamb curry for me.”

Her mouth watered probably for the first time since cancer rendered her taste buds useless.

“That’s interesting because I also make lamb curry that my friends like so much. I must have made it for them dozens of times,” I smiled.

“Doc, would you fulfill a dying person’s last wish?” she asked, looking at her granddaughters as if to get a kick out of how she was now playing with the doctor’s emotions.

“I want to have Pakistani lamb curry for the last time. Will you make it for me?”

“C’mon, gramma, that’s not what you’re here for,” her granddaughter said embarrassingly.

Thinking to myself whether she was serious or just joking, I said, “Well, I can’t promise, but you certainly have me thinking about it.”

We did not make any follow-up appointments, and she went home on hospice level of care, or to die, in her own words.

I went on to see the rest of my patients for the day and went home. The weekend came, and no matter what I did, my mind wandered to our conversation. My mind kept telling me that she was just joking. Who does these things nowadays? Maybe she had even forgotten what she said to me. But then, how could I not fulfill her last wish? How often are you given the task to fulfill a person’s last wish? In the legal system, in those places where the death penalty is given, isn’t it a thing that that last wish of a person is asked and then fulfilled? It’s as if the dying person’s right should be granted whenever possible.

Finally, I decided that I would make her the lamb curry. While I was cooking, I was thinking about whether she would even be able to eat it due to her disease. When adding spices, I thought about whether I should use my usual amount of spices or cut it down? What if it’s too spicy, and she gets nauseated? I looked up her address in her medical chart and took the neatly boxed lamb curry and a packet of naan. The neighborhood was not the nicest part of town. I found her house and knocked on the door. A young woman opened the door, and we instantly recognized each other. She was one of her granddaughters. She saw the food boxes in my hand and yelled, “Hey grandma, you wouldn’t believe who’s here.”

I walked into the house. It was very small. There she was, sitting in the living room on a couch. She had an oxygen tube in her nostrils. She appeared a bit drugged, probably from the morphine. At least a dozen empty cans of beer were on the table in front of her. The ashtray was full of cigarette butts, and rather than emptying it, she was now using the beer cans as ashtrays. There was a thick cloud and smell of marijuana in the room. She was a bit disoriented, perhaps from all the prescription and non-prescription drugs that she was under the influence of, but she could recognize who I was.

“Did you really think I would not fulfill your last wish?”

I smiled, put the lamb curry in front of her, and instructed her granddaughter on how much time to heat it up in the microwave.

Val wasn’t in a condition where she could have a long conversation with me, but she knew exactly what was going on. I saw her eyes smile for a moment, tearing through the pain otherwise displayed all over her face. She didn’t say much, but just enough when she said, “God bless you.”

I left her house wondering when somebody is given the death sentence, they are asked about their last wish. We seldom do that in medicine. Should we?

Farhan S. Imran is a hematology-oncology physician who blogs at Did I Ask?

Fibromyalgia is not a trash can diagnosis [PODCAST] 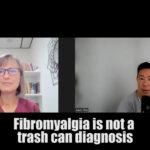 How doctors should organize