The Quebec government recently announced plans for a vaccine passport system, which, in the event of a fourth wave of COVID-19, will bar people who are not fully vaccinated from entering indoor settings such as bars, restaurants, gyms, and entertainment events.  Quebec is an outlier here: Apart from Manitoba — which issues “immunization cards” to those fully vaccinated, but has not established any rules for their use — all other provinces have either rejected vaccine passports or remained silent on the issue.

The direct benefit of vaccine passports is clear: they would allow us to safely lift restrictions on indoor gatherings, with all the attendant benefits to the economy, culture, sports, and education. They also incentivize people to get fully vaccinated.

So why are provincial governments generally opposed to the use of vaccine passports?  The answer isn’t as clear or compelling as one might hope, given all that is at stake.  In the early stages of vaccination rollout, there was a concern that marginalized populations would be overrepresented among the unvaccinated, and vaccine passports would compound their marginalization.  Whether this argument ever made sense is debatable — eschewing vaccine passports merely prolongs lockdown for everyone, imposing economic costs shouldered disproportionately by marginalized populations.  At any rate, these equity concerns have faded as vaccines have become readily available and, for the most part, equitably distributed.

It has also been argued that vaccine passports effectively coerce individuals to be vaccinated as a precondition of escaping pandemic restrictions, and that this violates the fundamental legal and ethical right to autonomy over medical decisions.  This argument fails for several reasons.  First, respect for patient autonomy does not entail that people should incur no costs whatsoever for their decision not to be vaccinated and share in the challenge of achieving herd immunity.  It has long been the case that students who have not received routine MMR vaccinations can be kept out of the classroom, and that health care workers who refuse the flu vaccine can be denied work shifts during an outbreak.  Holding people down and vaccinating them against their will is a rights violation; turning unvaccinated people away from a gym or a movie theatre during a pandemic is not.

A cynic might conclude that government opposition to vaccine passports is driven not by serious legal or ethical concerns, but out of a near-term political calculus: given all of the knee-jerk controversy surrounding vaccine passports, the safer option politically is to postpone their adoption for as long as possible.  Ontario, for example, has just announced that it will not develop vaccine passports, and will instead focus on vaccination efforts — committing to lifting all restrictions once 80 percent of the population has received one dose and 75 percent have received two.

We need to recognize this for the needless gamble that it is.  Other countries that have achieved high vaccination rates and lifted restrictions — such as the U.K. and Israel — are already seeing a resurgence of cases. As the reproduction number of the virus increases — Delta is almost twice as high as Alpha — the percentage of the population that needs to be vaccinated to achieve herd immunity increases accordingly.  While permissive policies could have worked with the alpha version, stronger incentives are needed now.

We need a sophisticated way to track what vaccines people have received, and when, so that we are equipped to respond to changes in disease virulence in a measured and proportionate manner.  Setting one-time, arbitrary thresholds for vaccination is not a lasting solution.  At the very least, federal and provincial decision-makers should be developing vaccine passport systems a fall-back option — rather than eschewing altogether in deference to resolvable concerns about equity, patient autonomy, and health information privacy.

How technology in the ER boosts the patient experience [PODCAST] 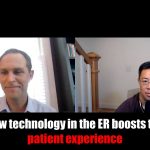 The future of general internal medicine is bright