Twenty-six hours into the shakes, sweats, crawling anxiety, and gripping nausea of opioid withdrawal, Faye caves in and takes a couple of fentanyl tabs. She knows that she must tough out a couple of days without fentanyl to start Suboxone (buprenorphine/naloxone) through a medication-assisted treatment program, but the sickness gets the better of her. Those couple of tablets reset the clock on her withdrawal.

Starting buprenorphine – an evidence-based lifesaver for opioid-dependent individuals – traditionally requires a substantial withdrawal period so that the tightly binding partial agonist does not quickly displace the pure opioid and cause sudden severe precipitated withdrawal. However, as far back as 2010, researchers in Switzerland experimented with a technique that came to be known as the Bernese method, where patients continue their opioid of choice while starting microdoses of buprenorphine that gradually increase over the span of a week, eventually displacing the opioid and leaving the patient on buprenorphine alone.

As fentanyl arises as a cheap replacement for bulkier products like oxycodone and heroin, this method has become ever more crucial as many patients are simply unable to tolerate fentanyl withdrawal long enough to initiate even a couple of milligrams of buprenorphine. Microdosing induction allows people to start buprenorphine while continuing their lives without stigmatizing interruptions to work, school, childcare, and life at large that are often caused by the opioid withdrawal period. It is entirely possible that forcing people through prolonged withdrawals to start buprenorphine was never necessary, perhaps even a needlessly cruel barrier to those trying to enter into recovery. Microdosing induction might have been the better tactic all along.

At the same time, microdosing induction to buprenorphine underlines a contradiction inherent in drug war-era rules and regulations. While avoiding the intensive withdrawal period, this induction technique requires that individuals continue their opioid of choice for approximately seven days while titrating buprenorphine to an effective dose. Unless the patient has an opioid prescription for pain, these continued opioids must come from illicit sources due to a law called the Harrison Narcotics Tax Act. The mundane language of the act – that doctors only prescribe opioids within the course of their usual practice – was interpreted by courts to mean that doctors could not prescribe opioids to assist an addicted patient, as addiction was not classified as a disease but a moral failing and thus not within the physician’s purview. As such, American physicians cannot prescribe safe, pharmaceutical-grade opioids to assist patients during the seven-day microdose transition to buprenorphine. Patients must secure their own opioids, which raises predictable barriers: paying to obtain more illicit opioids when individuals may have diverted funds to pay for treatment itself, reaching out to a dealer they have already tried to dislodge from their lives, engaging in the triggering behavior of continuing illicit substances when they have decided to quit, and risking overdose from an increasingly unpredictable and contaminated street supply.

This legal framework arose before nearly all modern understandings of substance use disorders, predating the founding of Alcoholics Anonymous by two decades, preceding the approval of methadone for opioid use disorder (OUD) by thirty years, and antedating the legal approval to use buprenorphine in the treatment of OUD by over eighty years. Indeed, the foundational legal structure under which addiction medicine operates today was passed by congress the same year that Archduke Franz Ferdinand was assassinated on the streets of Sarajevo.

Compounding the problematic legacy of the 1914 law is the comparatively youthful Controlled Substances Act, passed under President Nixon’s guidance in 1970. Among its crowning achievements is the classification of cannabis as a Schedule I substance “with no currently accepted medical use and a high potential for abuse,” setting the stage for the mass incarceration wave that continues today even as a plurality of states moves to legalize the substance. To write buprenorphine, providers are granted an exception to the Controlled Substance Act with the “X-waiver,” a bureaucratic innovation that simultaneously defies the spirit of the Harrison Act and limits buprenorphine provision to a set number of patients per provider in a manner never applied to problematic substances like prescribed benzos and stimulants.

Under a saner and more humane legal regime, Faye (a fictional composite of everyday cases) would enter into treatment with a provider who can assess her current dose and then prescribe sufficient pharmaceutical-grade oral opioids under close supervision to stave off withdrawals. Microdoses of buprenorphine would be initiated and cautiously increased over whatever time period is needed for the buprenorphine to exert its dominance at the opioid receptor while she remains comfortably free from withdrawal symptoms. To accomplish this humane end, American drug policy would require a revamp that honors a hundred years of discovery on the biochemistry of receptor-ligand dyads, the neurobiology of adverse childhood events, and the innovation of statistical methods to evaluate evidence and formulate best-practice recommendations. Most of all, Americans deserve the freedom and autonomy to choose the medical pathway most appropriate to their needs without the punishing risk of overdose while making the transition to recovery.

Virtual care is convenient, but is it better for everyone? [PODCAST] 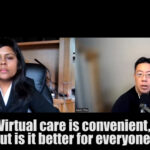 Is there more to patient safety than preventing medical error?