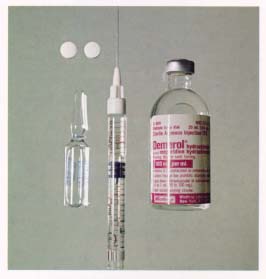 There is currently no clear explanation. Some have speculated that it may be related to the narcotic pain drug, Demerol. According to this report from the UK’s The Sun, “An Emergency Room source at UCLA hospital said Jackson aides told medics he had collapsed after an injection of potent Demerol — similar to morphine . . . Shortly after taking the Demerol he started to experience slow shallow breathing . . . His breathing gradually got slower and slower until it stopped.”

Another report from the Times Online, noted that, “Family members [said] he had received his daily shot of Demerol at 11.30 am, but the dosage was ‘too much’.”

I would not want to be that doctor who administered the drug, and apparently, police are looking for him.

An overdose of Demerol, also known generically as meperidine, is a plausible explanation for what happened. Certainly more likely than coronary artery disease. In fact, he had undergone a 3 to 4 hour physical a few months before for insurance purposes, and was given a clean bill of health. Presumably, that exam would have included thorough cardiac testing.

The classic signs of a Demerol overdose include changes in mental status, constricted pupils, and a decreased respiratory rate, among others. However, those signs are not always 100 percent accurate, for instance, as studies have shown some cases of Demerol overdoses in patients having normal sized pupils. Of these symptoms, a respiratory rate below 12 is the best predictor of an overdose. Also of note, Demerol is somewhat unique among the opioids in that it is also associated with seizures at high doses.

As to how a Demerol overdose can lead to cardiac arrest, a slowing in respiration rate decreases the oxygen supply to the heart, causing it to eventually stop beating, or go into a life-threatening arrhythmia.

No different from most emergencies, focus on airway and circulation is critical in suspected Demerol overdose cases. Narcan, also known as naloxone, which is a short-acting drug that counteracts opioid drugs, is then given.  Repeatedly, if necessary, until the respiratory rate rises above 12. Restoring adequate breathing is the leading priority. I could not find a report saying if Narcan was administered on the scene, or if so, how soon it was given.

An autopsy is scheduled for today, which may shed more light into the mysterious circumstances surrounding his death.

But I wouldn’t be surprised if a high Demerol dose was a mitigating factor in Michael Jackson’s cardiac arrest.

How did Michael Jackson die, and the medicine behind sudden cardiac death

Did Demerol cause Michael Jackson’s cardiac arrest and death?
14 comments