Eric Topol wrote an excellent op-ed in the New Yorker titled “Why Doctors Should Organize.” I’m going to spell out exactly how they should organize.

Doctors should form a nationwide class-action lawsuit against the major EHR companies for cognitive repetitive-strain injury. They can easily prove lost wages and mental strain from technical debt in the software interfaces they are being forced to use.

They should demand — first and foremost — that the interfaces are opened to the free market (like an iPhone allows apps to run over its back-end). Any secondary damages gained should be used to form MD-technologist programs at every major medical training site. I’ll explain exactly why, and how below.

Yes, I fully admit I’m no Topol. (My spirit animal is a burdensome pigeon named Eagle.) But perhaps an eyes-wide cyberpunk is the voice doctors need these days. I’m steeped in technology, I’ve been forming this concept for years, and I truly think doctors deserve better than they are getting.

Most of my readers are clinicians and technologists, so I’m going to skim over the current state of MedTech and clinical practice. We all know it’s a war zone, and the statistics are gory: 1 in 5 doctors plans to leave their current practice within two years, doctors have a higher suicide rate than post-combat troops in the U.S. military, doctors make less than high-school teachers, and physician burnout is at an all-time high. (I’m focusing on doctors here but #ilovenurses too, just substitute your specialty if you’re a clinician).

This article was written in response to a conversation with a friend who works for a health insurance company. He described to me with precision exactly how the organization algorithmically identified efficient doctors with legitimate claims, drove them out of private practice by systematically and specifically denying their office’s billings, how it forced them to join a group practice and then charged them to convert to institutional EHRs — decreasing their total claim volume.

I got mad. And now I’m going to do something about it.

You don’t need to hear more about the problem if you’re a clinician. Instead, I’m going to offer a very clear solution.

Legislation is the only option.

Doctors are fighting technology, and this is a losing battle. Instead, they need to take control of it.

As I’ve described, the current state of clinical practice was intentionally created by for-profit entities for financial gain. If you’re a hospital administrator, work at an HMO, or are an institutional software developer, and you’re reading this, you know this is absolutely true — because you’ve attended the same meetings that I have.

This isn’t just happening to doctors in private practice. In large hospital systems, they are being treated even worse, managed by computer algorithms, isolated, and individually shamed when they fall short.

For-profit markets that cause disease must be regulated before any solutions can be implemented.

Doctors are great, but the regulation of tobacco was arguably the most significant public health victory of our century. It was successful for three reasons, which were executed sequentially:

It’s time for lawyers to help doctors. It doesn’t matter if the public sympathizes with their plight — because they probably won’t. It only matters if they have a legitimate legal claim.

Doctors must organize nationally in the U.S. and Canada under a class action lawsuit against institutional software developers, HMOs and hospitals. They must demand that institutional software systems open interface development to a free market. If they can successfully claim damages or institute taxation, they must recycle all monies awarded to fund MD-technologist programs at medical schools and unbiased interface research.

Failing to take organized action will result in the end of the profession. Bedside medicine is under real and undeniable threat. Currently, 60 percent of doctors would discourage their children from following in their footsteps.

And high-IQ candidates are choosing technology over medicine as a career. As I’ve already explained, high-tech is circumventing clinicians while they are distracted by endless popups in software that was never designed by a clinician.

Doctors are not, and will never be, happy with data entry — and they are not and should not be working for machines.

But the biggest threat is still relatively obscure to physicians. The biggest threat is that artificially-constricted interfaces will shrink doctors’ work to predefined algorithms — questions and answers that fit into a checkbox. Then institutions can digitize and automate decision trees based on ritualized language that was never representative of a doctor’s actual cognition or skills.

Why we must crack interfaces

I’ll discuss in another article what type of interface would be more representative of a doctor’s work. But alternate interface designs have yet to be proven or tested. The point is not that one would be better than the other; the point is that one software design team will never cover all the various specialties and use-cases that are needed for meaningful clinician-computer cognitive symbiosis. And individual doctors themselves should be the ones to choose their preferred interactions, just like individuals adapt their cell phones with a suite of small apps that work for them.

Working more efficiently means more control over the use of clinical time. Doctors’ most meaningful work should never be automated. We need to carve out time for clinical tasks like tailoring care to the underserved, kinesthetic physical examinations, complex decisions where patients can practice autonomy in illogical ways, solving emergent problems, and listening to a patient.

“My intent wasn’t to save the world as much as to heal myself.”
– Abraham Verghese, MD

We know from radiology that A.I. is a valuable tool, a good cognitive aid. But fast-thinking A.I. cannot replace slow-thinking physician cognition. Properly applied, A.I. can help us work more efficiently, but it is meant to automate routine thinking, not replace structured evaluations, because it only compounds fast-thinking errors. We need doctors to do their real job.

Drea Burbank is a physician-entrepreneur.

Why are women leaving medicine? Gaslighting. 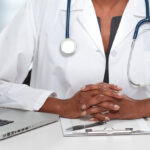 How doctors should organize
2 comments