As doctors, we carry more educational debt than most other professionals. We want to enjoy a nice lifestyle for our efforts, so we buy nice houses and spend our money. To make our hard work and sacrifices worthwhile, we have to invest our earnings to keep up with inflation.

Choosing how to invest our money is full of risk. One under-appreciated risk that we face — even if diversified — is currency risk. Policy from the Federal Reserve is to inflate our currency and debase it so that it loses purchasing power over time. As a 70% consumer-based economy, the Fed’s stated objective is to incentivize people to spend money, because it will be worth less the longer we hold it. In fact, since the Fed was created in 1913, the mighty dollar has lost 98% of its purchasing power. Although the stock market has gone up over the last 100 years, the dollar has lost most of its purchasing power, making the real returns look good notionally, but in real terms, far less impressive. 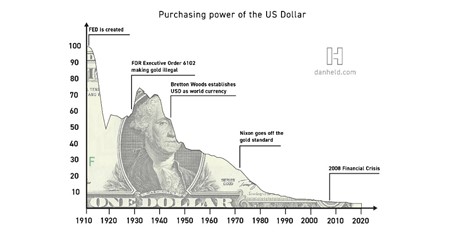 Inflation and debasement cause the price of assets to rise, and wages are not keeping up. Did you know that 22% of all dollars in existence were added in 2020?  It’s only a matter of time before these dollars make their way into the cost of food, gas, and other daily expenses that CPI does not measure.

We are entering a period of economic turbulence that hasn’t happened in 50 years. Harvard trained billionaire investor Ray Dalio has shown that we are at the tail end of a massive 80-year credit cycle. The last time this happened, the British pound lost its reserve currency status, we had two world wars, and the current global currency system was re-imagined with the 1944 Bretton Woods agreement to make the USD the world’s reserve currency. This is a pattern goes back 1,500 years, as thoroughly explored by Dalio’s series, The Changing World Order.  Empires and reserve currencies have changed many times over history. It would be foolish not to consider this a real possibility and prepare accordingly.

So what is a physician to do? We can invest in hard assets that are intrinsically scarce and act as stores of value in volatile times when confidence waivers in fiat systems such as the dollar.  This means gold/silver, real estate, art, collectibles, and Bitcoin. Paul Tudor Jones, one of the legendary Wall Street investing icons, laid out his expectations of a “Great Monetary Inflation” in this recent newsletter, and… he bought bitcoin. Investors are reacting to the same economic conditions that have led Ray Dalio to proclaim that “cash is trash,” meaning that holding cash has a real negative yield/return. Current economic conditions are set to favor scarce assets, and there is a new hard asset in town that is particularly poised to outperform everything in the coming years: Bitcoin, the world’s hardest asset class.

The simplest way to think of Bitcoin is as digital gold, which improves many of its shortcomings. Gold is cumbersome and heavy; expensive to mine, transport, and store.  It is also difficult to subdivide into tiny amounts and is subject to counterfeiting.  Bitcoin has none of those shortcomings – a person can send $1 billion in Bitcoin around the world for a few dollars in about 30 minutes, all with perfect security. The underlying blockchain technology is as revolutionary as the internet itself. Each bitcoin is subdivided into 100,000,000 “sats.” Much like pennies to a dollar, we can purchase any fractional amount of bitcoin easily.

Unlike gold, the amount of Bitcoin mined per year is cut in half every four years. It is the only truly deflationary asset class. This means that there will only ever be 21M Bitcoin (of which ~18 million have been mined thus far). A time is coming very soon where owning a whole bitcoin will be extremely rare.

Paul Tudor Jones and others expect Bitcoin to be the “fastest horse” over the next decade; same as it was over this last decade.  We have recently seen several publicly traded companies convert from dollar-denominated assets into Bitcoin, most notably over $500 million from MicroStrategy and Square.

The total market cap of Bitcoin is currently only ~$300 billion.  For comparison, the total market cap of gold is ~$10 trillion.  This would mean that if Bitcoin achieves gold’s valuation (still small compared to total global assets equaling ~$250 trillion), each Bitcoin would be worth ~$500,000. If Bitcoin does achieve gold’s valuation, it is likely to keep going to $1 million and beyond.

It is still extremely early in the Bitcoin story. This is due to the same network effect that Facebook, Amazon, and Apple have had as adoption of new technologies rapidly expand and are adopted by society. Bitcoin has passed its “tipping point.” Converting some of your money to Bitcoin now is like taking an ownership stake in the Internet itself back in 1995.  Ultimately, Bitcoin will either have a massive price appreciation or go to zero – meaning it is a hugely asymmetric investment.  A mere 1% allocation could potentially 2x the value of your portfolio; a 10% investment could 11x the value of your portfolio. Losing 1% of your portfolio is an extremely small risk given the upside to bitcoin. Finding the right allocation is up to you, but having 0% allocated to Bitcoin is a massive risk since risk in bitcoin is asymmetric to the upside.

Noah Kaufman is an emergency physician and financial planner. He is founder and CEO, Kaufman Medical Group, and can be reached on Twitter @noahkaufmanmd. 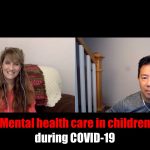