As a third-year medical student finally in the clinical arena, I’ve seen much more real medicine in the last three months than the entirety of my life. I’ve learned that the ethical dilemmas and the difficult patients are not restricted to TV medical dramas—it’s real life. On a Saturday morning on my inpatient Internal Medicine rotation, I witnessed my first end-of-life conversation, and the moment burned itself into my mind. As soon as rounds were over and we had a lunch break, I couldn’t eat. Instead, I wrote the following words on my phone, my eyes blurring:

“My attending told her there was nothing more we could do. Her husband’s intellectual facade broke. I saw the cracks in its exterior like the windshield in Jurassic Park 2. He held her thin hand. ‘She’s only 54,’ he choked. It was hard to see. To know this kind woman will most likely be dead in just a few months. It’s painful, almost taboo, to write that. She had trouble looking at my attending. I couldn’t look away, and my tears fell of their own accord.

I hope she spends time with her family. She shouldn’t worry about the albumin, about the building fluid, about the leukocytes, about the tiny tumors cropping up that block her biliary ducts and keep her drain from filling up. Her husband clung to the elevated bilirubin, desperate to believe that any of it mattered. It didn’t. ‘It’s the disease process,’ my attending spoke. I have a feeling it wasn’t enough, but I don’t know what more to do, and if I could even do it.”

Looking back on these words at the end of my rotation, I understand what I had felt, and I feel confident naming it: the futility of medicine. We can comfort and treat patients, but there’s nothing more we can do after a certain point. As a bright-eyed medical student who wrote on all her medical school applications that she wanted to save lives, it was and still is difficult for me to understand that.

In the second half of my rotation, we had a patient on our service who adamantly refused treatment and constantly demanded to go home, despite high oxygen requirements and poor renal function tests. A resident and I spent more than an hour in the patient’s room, explaining and bargaining and pleading for him to stay. I similarly felt defeat when the patient still decided to leave. The 54-year-old woman who we sent home just a week prior, who I cried with—her husband would have begged for more treatment. And yet, this man left when there was so much more we could have done. I was left with the same feeling of futility.

Whether there is nothing more we can do, or so much more we could have done, medicine unfortunately often ends in futility. I still haven’t come to terms with that, and I don’t know if anyone ever does, but I believe physicians must somehow learn to survive in the aftermath of futility. I’m hoping I get there, but for now, I’m struggling.

Shereen Jeyakumar is a medical student. 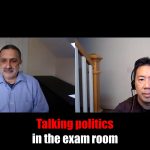