The current COVID pandemic has brought into stark contrast the woeful state of medical data collection and data sharing in the United States. It has been a central goal of Health and Human Services (HHS) to at first encourage and later mandate sharing clinical data across multiple electronic health records. Unfortunately, progress has been slow and actual clinically useful widespread adoption of shared medical data remains an aspiration.  Here, we discuss the pros and cons of 4 different approaches to sharing clinical data across various EHRs.

The solution mandated by HHS envisions a common set of software tools that will allow different EHRs to query and import data from any “certified” EHR. This is the so-called Fast Healthcare Interoperability Resources (FHIR) initiative and despite large expenditures of both time and money spent implementing this approach; it has not gained widespread use.  The original intent of FHIR was to share data in real-time from multiple incompatible electronic health records (EHRs), and incorporate data into each. FHIR is based on a series of complex pre-formed templates which currently limits the amount and type of data that can be extracted, but the basic and insurmountable impediment to this approach is that FHIR assumes that all records are complete, consistent, current, and accurate.

For any clinician who reviews multiple clinical notes, these assumptions are both naïve and wrong.  Even a cursory sampling of the variability and inaccuracy of something as simple as a patient’s drug list from different sources is sobering.  Does anyone believe that a problem list generated by a cardiologist, an orthopedic surgeon, and a psychiatrist will be either consistent or complete?  Allowing every EHR to query the other and merging disparate records of variable quality and content into multiple different electronic health records and expecting these records to be reliable and consistent is simply unrealistic.  A simple mind experiment is to wonder if it makes sense to maintain 5 different patient drug lists from 5 different EHRs used by multiple providers and ask the question: Are they all likely to be up to date and accurate?

An obvious solution to this problem is to have all EHRs upload medical information to a single master patient record.  Both Microsoft (HealthVault) and Google (Google Health) tried and failed to gain traction with this approach.

With its Apple Health app, Apple has taken the concept of a master patient record and added some appealing improvements.  First, the data is designed to be kept on the patient’s phone which solves the “silo” problem since the record literally follows the patient.  In addition, content and privacy are controlled by the patient. Apple has also used its considerable marketing power and programming resources to encourage multiple large EHRs and medical groups to support interacting with the app. which by all accounts is fairly straightforward.  The strength of this approach is also its main weakness, managing and importing records is controlled by the patient.  Early adopters and tech-savvy users love this approach, and it is a very useful way to incorporate personal health information, for example, from an Apple Watch, but it is unlikely to be suitable for a very large subset of patients.  Fundamentally it was this same problem of patient-initiated data acquisition that caused the demise of HealthVault and Google Health.

Google has taken this problem and turned it upside down. Rather than have various sources of medical data sent to a central record, Google’s Care Studio offers a single consolidated view of multiple different encounters and actively extracts data from multiple sources for clinicians to see.  By its very design, it solves the problem of keeping data current and trying to share data across platforms.  It is not dependent upon patients actively maintaining their own medical record. Google, like Apple, uses FHIR not to distribute data to multiple EHRs but as a tool to extract and normalize health care data from multiple EHRs and then display the results in a single easily searchable format. Care Studio offers the practicing clinician a powerful tool to examine key parts of a patient’s record.

However, the obvious limiting factor to Google’s approach is that it requires access to medical data from multiple sources.  This explains Google’s collaboration with Ascension Health which has allowed access to multiple sources of data within the larger hospital enterprise.  Although the early results are impressive, this fails to solve the ‘silo’ problem where patient data is limited to a particular enterprise system.

There is a fourth largely unexplored solution to data sharing which is to provide a Common Clinical User Interface across multiple platforms.  At first glance, this approach seems unlikely to succeed since it suggests the need to completely revamp every EHR’s user interface, something which clearly will not happen.  However, tools exist which would allow a common clinical user interface to function as a simple plug-in feeding clinical findings to the main EHR software which often was originally designed and substantially functions to run the business side of medicine.  Such a solution could solve a number of problems.  First, at the moment every EHR has its own nonstandard way of entering clinical data.  The learning curve for many systems is quite steep and requires days, if not weeks, of training.  Not surprisingly, this is both frustrating and confusing to the clinical provider.

Current clinical user interfaces are reminiscent of the early days of word processing.  Initially, there were a large number of different systems, each with its own rules and workflows. This made no practical or economic sense, and the industry rapidly coalesced around one solution (MS-Word).  It seems inevitable that a similar consolidation will eventually come to the medical arena.

Besides democratizing and normalizing the user experience, a standardized user interface would allow dramatic enhancements to clinical workflow.  Users would have access to optimized standard workflows across various EHR platforms.  Should there be 20 different ways to enter a patient’s vital signs? Is there a rapid and optimized workflow to evaluate COVID?  Does it make sense to constantly re-invent the clinical workflow wheel and end up with multiple duplicative and often complicated solutions?

In the same way that a master patient record is only part of the solution, a standardized user interface by itself does not solve the problem of data sharing.  However, it would dramatically simplify aggregating data either into a patient-centric master record like Apple’s approach or into a Google-like solution such as Care Studio.

When clinicians are bullied at a school board meeting [PODCAST] 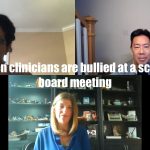 Looking at the studies behind masks