An excerpt from The Universal Rules of Life: 27 Secrets for Managing Time, Stress, and People.

Ask people what they wish to achieve or hope to accomplish in the following year, and the answer will usually be something such as any of these: “I want to: lose weight; improve my finances; get a new job; exercise more; revamp a relationship; manage stress; stop smoking; set aside more time for myself.”

But according to U.S. News & World Report, the failure rate for New Year’s resolutions is around 80%, and most people lose their resolve by mid-February.

Why? Because when it comes time to take action, we hem and haw, deliberate and dither.

We wait for the free time, the perfect day, the right season, a better mood, or optimal market conditions. Or we stall until we can resolve a medical crisis, smooth over a problem with the in-laws, or put some money in the bank.

Rather than adopting a do-it-now attitude, we revert to the “I will” phenomenon: “I will cut out all sweets (beginning next week); I will arrange for us to get together for dinner (really soon); I will pay for a gym membership and start exercising (as soon as I get paid); I will put my résumé together (right after the holidays); I will get at least seven hours of sleep (starting next month); I will curtail my obsession with checking my phone (once I’ve answered all my emails).” And on it goes.

There are two major problems with this “I will” pattern.

The first is that intentions and resolutions, which are genuinely expressed in good faith and with vigor and certainty, get us nowhere. Intentions aren’t the same as actions. Instead, we remain stuck in our comfort zones, avoiding risk and missing opportunities for growth.

The second problem is that whenever the perfect opportunity presents itself, some other hurdle miraculously crops up, and the plan of action is replaced by another “I will” vow. We are easily derailed, seizing any distraction as an excuse to avoid changing our behavior. And the result is failure to achieve our dreams.

We fail because we never begin!

Procrastination is a common human handicap, changing our resolutions into broken promises.

Procrastination stops everything. It’s a form of paralysis. It’s the force that prevents millions of people from getting what they really want and from bringing their dreams to fruition. It thwarts productivity and hinders enjoyment. And it crushes the possibility for fulfillment. When we procrastinate, our usual rationales for postponement take over, assuaging our guilt and keeping us from advancing our goals.

But why do we procrastinate?

Is it a matter of laziness? It’s much easier to delay and wait than to be disciplined and act.

Is it because we’re creatures of habit? Habits are addictive and hard to change. We become stuck in our routines, and willpower isn’t enough to catapult us out.

Is it because we have an underlying fear of failure? Taking a risk is always a challenge and causes many of us to feel anxious about the unexpected. We dread failure and can’t handle rejection.

I would say that procrastination is the result of all three factors. But what can we do to beat it? Is there a neat and easy trick? Yes, there is.

Dr. William Stukeley, an eminent physician, was having dinner with his friend Sir Isaac Newton, the famed English mathematician and physicist. After enjoying a most excellent meal, they both stepped out into the garden to conclude the evening with a fine cup of tea.

Stukeley, in his “Memoirs of Sir Isaac Newton’s Life,” published in 1752, recalled that he and Newton were sipping tea under the dappled shade of some apple trees when Newton told him that he “was just in the same situation [when] the notion of gravitation came into his mind. It was occasioned by the fall of an apple as he sat in contemplative mood. Why should that apple always descend perpendicularly to the ground, thought he to himself.”

Triggered by this singular event, Newton, who is recognized as one of the most influential scientists of all time, went on to devise his three laws of motion and set them forth in his “Philosophiae Naturalis Principia Mathematica” (“Mathematical Principles of Natural Philosophy”), published in 1687.

In his first law, Newton stated what could be simplified as follows:

This law of physics might as well be a law of human behavior. It’s telling us that:

If we do nothing, we get nothing—and we stay stuck at zero. But as soon as we start moving, we continue moving—and end up achieving things.

Newton essentially points to us the biggest secret of achievement:

Just start taking action — and the rest will follow!

Sir Isaac Newton died in England in 1727, but his famous apple tree continues to grow in the orchard at Woolsthorpe Manor, where he lived.

And every now and then, one of the apples on this tree starts falling … then continues falling, and continues reminding us of Newton’s first law of motion!

The one sentence that made a bestselling author

Here is another story.

It’s about Glenn Plaskin, an accomplished American author who struggled with procrastination while he was writing his first book.

At the age of 25, he had moved to New York City, armed with a smart idea for what he hoped would become a bestseller. He secured a meeting with multiple editors and, luckily, wound up with a contract.

However, during the first two years of writing what ultimately would become a 600-page biography, he couldn’t work effectively. He felt chronically overwhelmed by the task. And he was easily distracted by activities that had nothing to do with writing.

So, one day, as a last resort, he decided to consult a therapist.

As he sat opposite her, he complained that he didn’t feel like writing, that he couldn’t get into his element.

She stopped him short. “What makes you think I’m interested in your feelings?” she asked.

He was startled, taken aback — insulted, even. “Isn’t that why I’m paying you? Why shouldn’t you be interested in my feelings?” he thought.

This was Glenn’s “aha” moment. That simple, brilliant statement changed the course of his life. He discovered Newton’s first law of motion: If he just got started, he would gain momentum.

He didn’t need to feel motivated anymore. He just dug into his writing. He didn’t attempt to write entire chapters of the book in one sitting; instead, he broke up the material into small chunks and wrote one segment at a time. He didn’t dwell on perfecting each paragraph. He just kept going. He felt like he was putting together a jigsaw puzzle. He didn’t expect to do it all at once but rather took a piecemeal approach.

In the end, his book became a bestseller, featured in The New York Times and Los Angeles Times.

His greatest breakthrough, his ultimate takeaway, was to start acting immediately. Yes, it took him three and a half years, but he did it.
So can you.

As you might have assumed by this point, the magic formula for mobilizing yourself is to eliminate these two words from your vocabulary:

Just do something, anything — as long as you do it now.

It’s simpler than you think.

Suppose you keep saying that you will write a letter to a good friend but never seem to find the right time to do it. So, instead of writing the perfect letter, you wind up writing nothing at all. The solution? Just sit down now and write a few lines, “I just wanted to say hi” or “How are you doing?” Write something short and simple, then just text it or email it, now. It’s amazing how easily we can overcome procrastination if we push ourselves to take the first tiny step.

Or suppose there is a book you’ve wanted to read, but you never managed to find the time to do it. So, just read part of it for five or 10 minutes — now. The rest of the book can wait for another now moment, whenever that comes.

Or if you always seem too tired or too late to go to the gym, try to make it for even 10 or 15 minutes, whenever you have a little now opportunity. Even if you end up exercising only fifteen minutes per week, that’s still sixty minutes a month. Maybe it’s not ideal, but it’s definitely better than not doing anything at all, and your health will still benefit from it.

As Newton’s first law of motion says: An object in motion stays in motion. Once you start a task, you’re much more likely to finish it. And as Mark Twain said in this famous quotation attributed to him, “The secret of getting ahead is getting started.”

So, you don’t have to do it all today. Break down intimidating tasks into small, digestible bites. I used the same principle while writing this book. I couldn’t do it all at once. I did it one or two pages at a time, whenever a now moment presented itself.

Finally, take inspiration from what novelist Nathaniel Hawthorne once observed, “To do nothing is the way to be nothing!”

Taking action immediately has another benefit: it will dampen the urge to act perfectly.

Being perfect is a heavy burden to carry. An obsession with doing the perfect job at the perfect time is a form of self-sabotage that guarantees you will achieve nothing.

Even starting awkwardly is still better than not starting at all. Do something now, however imperfect it may be, knowing that you can make it better later.

Nabil Fanous is a cosmetic surgeon and author of The Universal Rules of Life: 27 Secrets for Managing Time, Stress, and People.

An epidemiologist talks about the "next" COVID-19 pandemic

What the Friday 5 p.m. consult says about your priorities 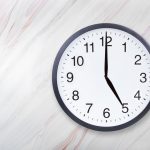